Good afternoon, Arrowheads! Today I have a very special treat for y’all: a review for a Christian movie to release on June 29th, Summer of ’67! Written and directed by Sharon Wilharm, the film is based on real-life events and focuses on the lives of three women in the late 1960s as their sweethearts are fighting in the Vietnam War. This movie was an absolute pleasure to watch, so without further ado, let’s turn back time and visit the Summer of ’67! 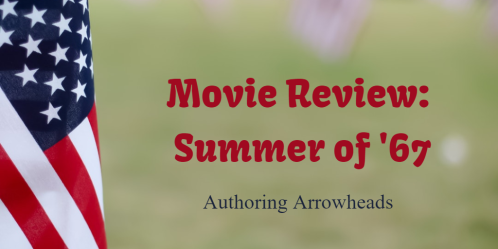 Summer of ’67 is a film based on real life events, focusing on the lives of three women: Milly, Kate, and Ruby Mae, as they face their love interests leaving their hometown to fight in the Vietnam War. The story begins in 1965 with Milly and her new husband, Gerald, getting married and having to live with Gerald’s unsatisfiable mother, much to Milly’s dismay. Because he can’t find a better job until he finishes his service, Gerald decides to enlist not long after their first child is born, leaving behind his son and wife who has just discovered she’s pregnant for the second time.

At Milly and Gerald’s wedding reception, Kate met Gerald’s younger cousin, Peter, who had just moved to town. Peter has hopes of enlisting after he graduates, while Kate despises war. The two end up dating, and Gerald reveals that Peter enlisted without telling Kate, creating a rift in their relationship. After he leaves for his tour, Kate experiments with the hippie lifestyle as an act of rebellion.

Ruby Mae is the housekeeper for Milly and Kate and is strong in her faith. She has hopes that she’ll find love of her own one day, and then meets Reggie, a man who cleans the church she attends. Their relationship is love-at-first sight, although their romance is cut short when Reggie reveals he’s been drafted.

Whose, if any, relationship will survive the war?

For fear of spoilers, I won’t reveal anything else about the plotline. Instead, I’ll overview the positive and negative points from the film:

Overall, I’m meriting Summer of ’67 4.5 stars. I’d like to thank the writer and director for the film for providing me with a private screening link for review purposes. A positive review was not required for the screening link access; the thoughts in this review are all my own and I highly recommend checking out the movie! The film will be released in Nashville the week of June 29th.

Want to Learn More? Click here to watch the Trailer!

What are some of your favorite Christian movies? I’d love to hear from y’all! 🙂

One thought on “Movie Review: Summer of ’67”