Are you a Christian who loves to write? Do you feel as if writing is your God-given talent? Do you sometimes wonder if your talent for writing will ever make an impact on others and spread God’s love? If you’ve answered “yes” to any of the above, sit back, relax, and read on. This post is dedicated to you. 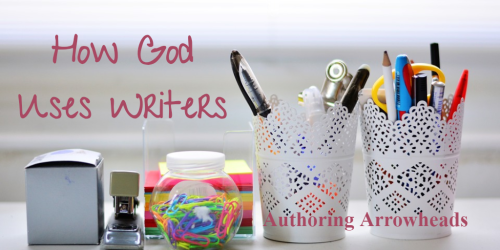 “Having then gifts differing according to the grace that is given to us, whether prophecy, let us prophesy according to the proportion of faith; Or ministry, let us wait on our ministering: or he that teacheth, on teaching; Or he that exhorteth, on exhortation: he that giveth, let him do it with simplicity; he that ruleth, with diligence; he that sheweth mercy, with cheerfulness.”
-Romans 12:6-8

God’s word tells us that there are several different gifts or talents that He bestows on us for is glory. Some of the gifts are mentioned in the verses above, and others come in the forms of singing, speaking, or writing.

When I was a kid, I never thought of writing as a spiritual gift from God that could be used for His glory. People don’t read as much as they listen to music, I thought. Or, You can’t exactly perform writing in a talent show. Is it really a talent?

Once, the preacher’s wife at the church my family went to said I should write Christian stories. Back then, I brushed the suggestion off. I didn’t think my writing could be used in that way, to make a difference in people’s lives by writing about Christian beliefs. Honestly, it took me until three or four years ago to realize that God can use me in any way possible, just as He used people who doubted their own abilities in the Bible, like Moses. So, how can writing be an impactful spiritual gift?

If you’ve read Mere Christianity by CS Lewis, you may know that the book was adapted from a series of radio talks Lewis did on Christianity. According to Wikipedia, in 2006, Mere Christianity placed 3rd as one of the most influential evangelistic books since 1945. If Lewis’s talks had not been adapted to the written word, imagine how many people would not have been influenced by the Godly knowledge Lewis spoke of?

If that’s not enough to convince you, let’s consider the Bible–God’s Holy Word–itself. God documented His Word in written format, using dozens of different authors throughout biblical times to scrawl down information He gave them. Thousands of years later, the Bible’s Truths are still preserved.

The written word’s lifespan greatly surpasses that of human life, and provides a more accurate account for future generations than that of passing stories down through word-of-mouth storytelling. Personally, I’ve always felt that writing is an alternative form of communication for those who lack verbal communication skills. Being shy and socially awkward growing up, I never thought I could make an impact for God if I couldn’t speak or sing about Him. Through the aforementioned examples, God showed me otherwise.

Though my first published novel referenced God lightly, my future publications will include more about God’s healing, mercy, and redemption through Christ. Christian writers, you may feel that your short stories, poems, blog posts, or novels aren’t making much of an impact. You may be discouraged by a low follower count, or low sales stats. Through all this, keep working at it! Keep using the gift God gave you!

“As every man hath received the gift, even so minister the same one to another, as good stewards of the manifold grace of God. If any man speak, let him speak as the oracles of God; if any man minister, let him do as of the ability which God giveth: that God in all things may be glorified through Jesus Christ, to whom be praise and dominion forever and ever, Amen.”
-1 Peter 4:10-11

If you feel God leading you to write, then write, no matter how many or few people are reading. God will allow people who need to read your writing to read it. God will direct the sails of the impact your work will have. God will allow it to have an impact as He sees fit. Besides, your writing may be making a bigger impact than you realize. God has a way of moving mountains for us in ways we may not be aware of, all for a greater ending in His time. Keep writing, Arrowheads! ❤

What advice do you have for Christian authors? Please share in the comments below! 🙂

14 thoughts on “How God Uses Writers”