Hey there, Arrowheads! I’m here today with another blog tour stop, this time for a young indie author named Loretta Marchize! Her A Princess at Heart Blog Tour is currently going on celebrating the release of the third installment of her The Fairy Tale Chronicles series, A Princess at Heart. I’ll be reviewing the first book in the series, The Lost Princess, today, so let’s get started! 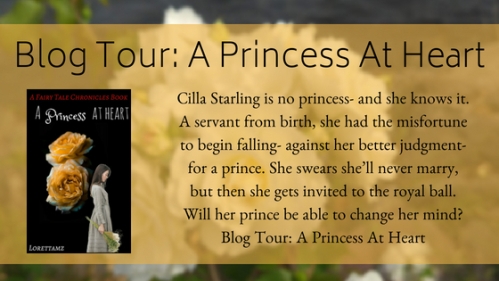 Synopsis of The Lost Princess

Cilla Starling has lived in the Kappaka palace as long as she can remember. Prince Ethan Villn and his family are in the prisons of the palace, and Queen Villn rules over her fearful subjects. When Lord Rush confronts Queen Villn- resulting in Cilla, Ethan, and Ethan’s family’s freedom -they decide to fight back. So begins a journey, to and from the White Kingdom, a gathering of allies, and a battle against a distraught Queen.

The four royal siblings who live next door in the White Kingdom are more than ready to help, as Queen Villn has caused quite a stir in their kingdom. In fact, one of them holds a secret to the location of the lost Villn princess, Ethan’s beloved younger sister, and perhaps the only person with any hope of talking to Queen Villn. If, that is, she’s brave enough to leave the safety of the White Kingdom.

The Lost Princess is a twist on the regular fairy tales, including the princesses Rapunzel, Snow White, Ariel, Melody (Ariel’s daughter), Cinderella, and Belle.

Before I begin this review, I want to point out that the author was fourteen when she first wrote this novella. To be honest, I could tell she was young when she wrote it, but that is not a bad thing! 🙂 The author’s writing style at that age reminds me a lot of my own when I was fourteen, so I completely understand why the author made some of the choices she made with pacing, description, etc. For a debut novella, I believe she did a good job and has great potential to grow and shine for the remainder of the series. That being said, there were parts of The Lost Princess that I liked, and others I was iffy about.

Highlights:
The Queen’s Characterization: The author did a fantastic job creating a realistic villianness. Her acts of insanity were shocking yet believable, and readers have a reason to sympathize with her later on. As far as redeemable villains go, she is top-notch.

Dove and Cilla: These two ended up being my favorite characters, as their potentials shined through the most. Dove was nosy, curious, and sweet, while Cilla was sarcastic, strong-willed, and brave.

A Certain Crash of a Ship: Okay, so there were two characters that I thought were going to end up falling for each other, and a well-executed plot twist occurs so they–under no circumstances whatsoever–can be together. XD This author knows how to throw in an unforeseen plot twist!

Cast of Characters: With such a large cast of characters (I counted 12 that were mostly in the spotlight), it was a little difficult to not mix the characters up. A few characters’ personalities were also not developed to their full potential, so they were not as relatable as others.

Pacing: From an author’s standpoint, I completely understand what it’s like to want to hurry to finish writing your first novel, so I understand why some of the action seems rushed. However, from a reader’s standpoint, I wish there could have been more difficult circumstances for the characters to face, as most of the problems they encounter are easily solved. I also think that if the book was about 50 pages longer, the characters could have enough room to develop more and have their unique personalities shine through.

Final Thoughts:
Loretta Marchize is a promising author who has great potential as her author career continues to develop. I’m excited to see what she’ll come up with as she hones her unique writing abilities. I also want to commend her for being courageous enough to publish her books at such a young age! That’s true passion for writing, and an author with that much passion has a bright future! 😀

Overall rating: 3.5 out of 5 stars.
I received an ebook of The Lost Princess for reviewing purposes for the blog tour. A positive review was not required to receive the ebook.

Click below to view the books on Amazon:
The Lost Princess (Book #1) | The Princess Ambassador (Book #2) | A Princess at Heart (Book #3)

Teen author Loretta has written three novellas, all self-published and part of a series. She loves to run (cross-country), read, and write. She’s always cold- you can usually find her wrapped up in a blanket on the couch with a book and a laptop. Her favorite color bounces back and forth between blue, green, and purple. She loves chocolate- preferably dark with a hint of sea salt. You can usually find her on Goodreads, Wattpad, or on her website, lorettamz.com

Follow the rest of A Princess at Heart Blog Tour:

Well, that’s all for today, Arrowheads! Be sure to check back here on Wednesdays and Fridays for regularly scheduled posts.

Are you an author searching for blog tour stops? If so, reach out to my Contact page! 🙂
-Allyson 😀

5 thoughts on “A Princess at Heart Blog Tour: Review of The Lost Princess by Loretta Marchize”