Who says published authors don’t lack motivation from time to time? I’ve pursued writing for 16 out of the 23 years of my life, and I constantly struggle with finding inspiration to write. Whether I’ve got a case of writer envy from reading or hearing about other, more successful indie Christian authors’ work, or simply have overwhelming writer’s block, quotes about writing often help to bring me back to my roots. And maybe, after reading some of my favorites, they’ll come to help you too! 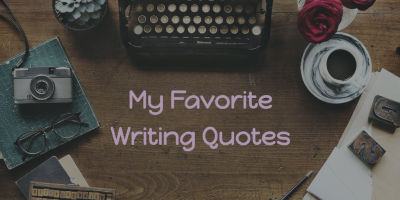 “Write without pay until somebody offers to pay.”
-Mark Twain

This quote by Mark Twain served as one of my main sources of motivation in the years before I pursued publishing. For years I was convinced that publishing would be a “someday” sort of thing, but I’ve never allowed the lack of an audience, or making money for that matter, to stand in the way of me pursuing this dream.

“There comes a point in your life when you need to stop reading other people’s books and write your own.”
-Albert Einstein

One of my favorite college professors often said something along the lines of, “Every person has a novel in them,” and he was an IT teacher! I wholeheartedly agree, and like Einstein says here, we need to take the plunge and write our own. You have a voice that deserves to be heard as much as your favorite authors. Don’t live in their shadows!

“I’m a pencil in the hand of God.”
-Mother Theresa

As a Christian, this is a humbling quote. No matter what we accomplish as authors, or anything really, it’s all thanks to God for directing our paths. And, in allowing Him to guide us, we should seek to honor Him in what we share with the world.

“I think I did pretty well, considering I started out with nothing but a bunch of blank paper.”
-Steve Martin

Anyone that truly knows me knows I’m in love with blank paper. It’s beyond beautiful to me. And, you know, it’s a fresh start. A blank page can form any story imaginable. Isn’t that mind blowing? Release your imagination on that blank paper!

“If you don’t see the book you want on the shelf, write it.”
-Beverly Cleary

Similar to the quote above by Einstein, if there’s a story you’re desiring to read, then the best solution is to write it. No one else is going to get it right if you don’t.

This one is kind of self-explanatory. You’re going to write crappy lines. You’re going to write crappy paragraphs, pages, and chapters. You’re most likely going to rewrite your first chapter multiple times and have the urge to scream into a pillow, but don’t stop writing because you’re on a crap-writing streak. Someday that “crap” could inspire you. I encourage you to keep a “Crap Document” for all that writing you’ve discarded from your WIPs. Despite what you’re thinking, it could come in handy one day.

“I wrote because, at times, I had to. It was write, or develop an ulcer–or forget. I chose to write. At times I even wrote for the sheer fun.”
-Ruth Bell Graham

This quote relates to me on so many levels. Sometimes, well most times, I don’t write for the fun of it. I write in my diary to release my frustrations or pen down the details of how head-over-heels I am for my boyfriend. I didn’t start writing song lyrics and poems for the heck of it; I wrote them to make an art form out of hurt teenage feelings. Every heartache, heartbreak, smile, laugh, I’ve written about. Only after all this has past, I write for fun.

“That’s what storytellers do. We restore order with imagination. We instill hope again and again.”
-Tom Hanks as Walt Disney

As if I hadn’t already fallen in love with the idea of Tom Hanks playing Walt Disney in Saving Mr. Banks, this quote made me adore the film even more. My main goal as an author is to instill hope in others, whether that hope is in God, in love (even though God is love), in family or forgiveness. I want to inspire others to be better people in the real world through the influence of fictional characters.

“Words are timeless. You should utter them or write them with a knowledge of their timelessness.”
-Khalil Gibran

The phrase “sticks and stones can break my bones, but words can never hurt me” is a straight up lie. Words have the power to hurt and heal. Words can bring people to God, or bring people to a state of turmoil. That being said, choose the words you write carefully. You never know how much influence you may have.

“Even in literature and art, no man who bothers about originality will ever be original; whereas if you simply try to tell the truth (without caring twopence how often it has been told before) you will, nine times out of ten, become original without even having noticed it.”
-C.S. Lewis

Lastly, one of the things I’ve learned through writing, especially flash fiction, is that if you constantly brainstorm for “original” ideas, you’ll deplete every ounce of creativity in you. We as writers need to embrace the “if it ain’t broke, don’t fix it” mentality, meaning that we need to focus more on what we’re saying rather than the method we’re saying it in. I’m not saying do the whole Hallmark cookie-cutter plotline thing, but aim tell the truths you’ve been hiding away, even if it’s in a familiar format. When you aim to tell your story, you’ll be original without even trying.

Thanks for reading! What are some of your favorite quotes about writing?

2 thoughts on “My Favorite Writing Quotes”